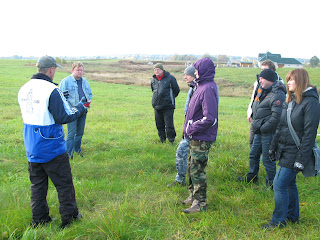 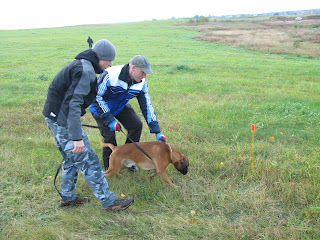 Tõsi ma kirjutan eestikeelse kokkuvõtte ka lähipäevil sportkoera kodulehele ürituste alla (ning panen siia lingi).
Rohkem pilte üritusest on näha siin.
As in Lithuania was discussion, that they have to use Google Translation to understand tracking video analysis in this blog, I thought that I will write about seminar in Lithuania in english. As anyhow they would like also to read, what I say about it, then it is easier to them and this time Estonian will use Google translator who does not understand tha language :)).

Late back yesterday I write just today. It was great pleasure to be 3 days in Lithuania and make seminar of tracking for local people and lecture about judging IPO for judges. Great thanks to Viktoras of organising everything so well. Everything for lectures was organised perfect and also tracking fiealds looked nice. And it was good luck, that weather also was good.
About tracking. There was half of the participants like beginners and half of them allready had trained the track before. Most of the dogs were working line working line german shepards and malinois. I really liked the attitude of the people. They were really interested about details and wanted to go on and learn. Also the questions what were asked showed, that they were thinking about what we are doing deeper and analysing for themselves. There was several good dogs, which will have good future in the tracking if they are trained well. Al the beginners looked really nice, they had good will to work, they were well motivated and angry for food. I think that with all of them we moved really well on in these days. If the owners go on like this, they will have before winter allready chance to make alse occasionally empty tracks and also corners and in next year allready have good foundation for the start. Most what they should look about is to have things in a right way learned to the puppies with good motivation, that there will not be conflict in the future.
Dogs, who allready were little longer had very similar problems. The main thing was, that the foundation was not made so perfect, that dogs could understand, what the handler wants. So they were litlle running or circeling or looking for food and if they were corrected it was little difficult for them to understand, what is wrong and what is right. So reaction to handler action was mostly conflict not the solution. To go on, I think with most of these dogs there is must to come little back and build better foundation and then to try go on so, that dog understand better what happens and feels more selfconfident in is work also with correction.
Whole seminar left me good feeling, because it seemed, that people got the ideas and way, how to go on. I wish luck for them in trainings and hope, that if they will have problems they eighter ask from me or from someone other not to make mistakes.
More picture about seminar are here.

Thanks to Viktoras for pictures and organisation and help.

Email ThisBlogThis!Share to TwitterShare to FacebookShare to Pinterest
Labels: jälg